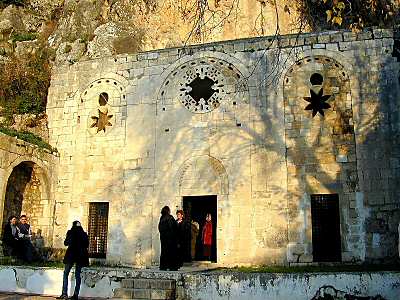 Antioch on the Orontes, also called Syrian Antioch, was situated on the eastern side of the Orontes River, in the far southeastern corner of Asia Minor. Three hundred miles (480 km) north of Jerusalem, the Seleucids urged Jews to move to Antioch, their western capital, and granted them full rights as citizens upon doing so. In 64 B.C. Pompey made the city capital over the Roman province of Syria.  By 165 A.D., it was third largest city of the empire

This cave is widely believed to have been dug by the Apostle Peter himself “Simon Peter (Greek: Πέτρος, Pétros, “stone, rock”;[1] c. 1 BC – AD 67), sometimes called Simon Cephas (Greek: Σιμων Κηφᾶς, Symōn Kēphas; Aramaic: Šimʕōn Kêfâ‎; Syriac: ܫܡܥܘܢ ܟܐܦܐ, Sëmʕān Kêfâ) after his name in Hellenized Aramaic, was a leader of the early ChristianNew Testament Gospels and the Acts of the Apostles. Peter was the son of John or of Jonah, and was from the village of Bethsaida in the province of Galilee. His brother Andrew was also an apostle. Simon Peter is venerated in multiple churches and regarded as the first Pope by the Roman Catholic Church Church“.

as a place for the early Christian community of Antioch to meet, this cave was used for secret meetings of Antiochene Christians avoiding persecution, It was also the place where they were first called “Christians.”

Whether or not this is so, St. Peter (and St. Paul) did preach in Antioch around 50 AD and a church had been established in Antioch by as early as 40 AD.

Antioch became a major center for planning and organizing the apostles’ missionary efforts, and it was the base for Paul’s earliest missionary journeys. Famously, it was the inhabitants of Antioch that first called Jesus’ followers “Christians” (Acts 11:26).

The attractive stone façade of the church was built by Crusaders, who identified the grotto during their rule of Antioch from 1098 to 1268. 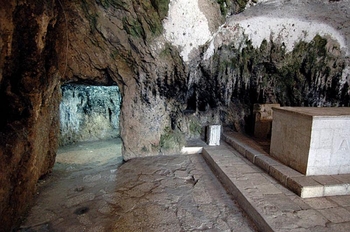 The interior of the grotto church is austere and simple. The only permanent furnishings are a small altar, a single 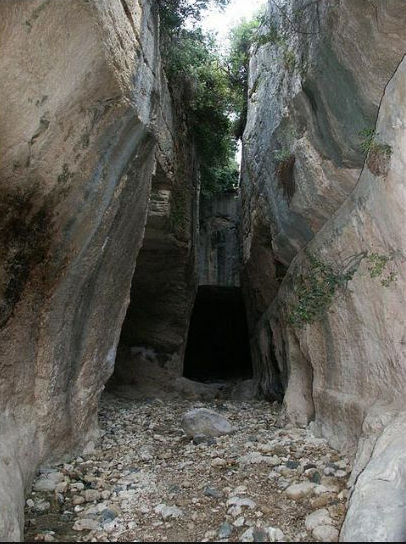 back of the church tunnel, Cave Church of St. Peter, Antioch

statue, and a stone throne. On the walls are the barely discernible remains of frescoes, and on the floor can be seen some traces of mosaics. In the back of the church is a tunnel that leads into the mountain interior, popularly believed to be a means of escape in times of persecution.

The cave is reached by going up the stone steps, on the right a relief in the mountainside with a veiled person who looks over the city and most probably dates back to the 2nd century BC. The cave is hidden by a forefront and facade, built by the Crusaders. In the cave there is a small altar, part of a mosaic floor and some fresco’s.

Lately [2008] huge parts of the cave collapsed. The possibility of further collapses means a serious danger for the security of visitors, and caused the closure of the cave by the Turkish authorities.

Worship services are still held in St. Peter’s Grotto, especially on the Feast Day of St. Peter and St. Paul (June 29) and on Christmas. 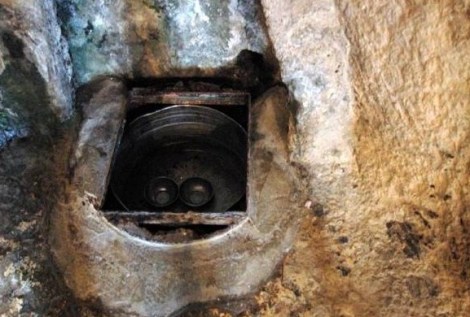 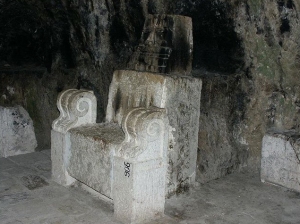 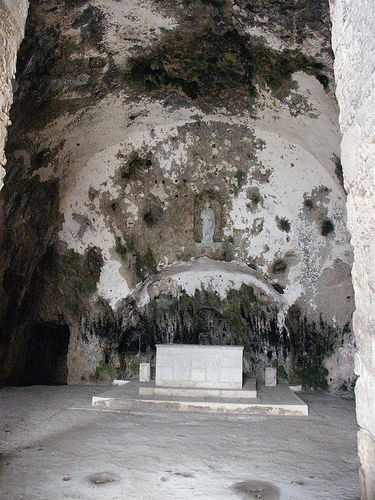 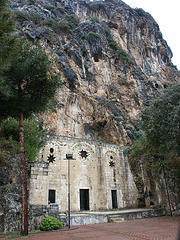