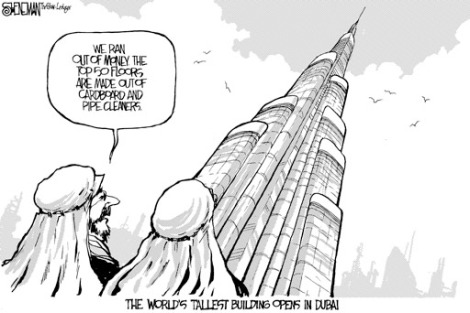 This is an article from TT30 member Ghanem Nuseibeh. TT30 is a thinktank of 30 members of Youth Organization of Club of Rome. They established a project called “Sustainable Dubai”. which has a provisory place at http://www.twine.com already.

The UAE is one of the worldʼs worst pollutants on a per capita basis. In absolute terms, the UAE emits about 150,000 thousand metric tonnes of CO2 which on a per capita basis is equivalent to over twice the per capita emissions of the United States and fifteen times that of India. On average and given its population size (including expatriates), the UAE emits 10 times more than its fair share even at current emission levels. Contributing to this high pollution level is the amount of construction going on. However, the lifestyle that is attracting so many expatriates to Dubai is the main culprit in making it such an unsustainable city.

Dubai residents own one car per 1.84 residents compared to 1 car per 2.88 in London and 1 per 2.25 in New York. What seems to be an acceptable difference between car ownership in Dubai and 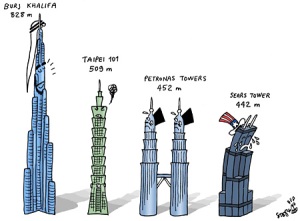 well-established world cities is overshadowed by the fact that private cars in Dubai are the main – and in most situations only form of transport available as Dubai currently lack a significant public transport sector. The roads infrastructure is barely coping with the number of cars on the roads, which is the reason why the Dubai government is planning to increase the use of public transport. The National newspaper (Volume 1 Issue 8) reported that “Dubai authorities plan to force drivers out of their cars and on to public transport in a campaign to ease the cityʼs notorious traffic congestion”. It quoted a director of the Roads and Transport Authority as saying that “….driving will become a lot more expensive in the next few years”. While this looks like a welcome development from the outside, it is in fact removing one of the attractiveness of owning relatively cheap high-end cars that attracts so many expatriates. In addition, the way that Dubai is planned and the harsh weather conditions combine to make effective use of public transport a dream that is difficult to realize. An example is the Dubai Metro which is scheduled to open in late 2009. Distances between metro stations are far and for most of them not within walking distance to the destination they are supposed to take passengers to (the Burj Al Arab station is about 5 km away from Burj Al Arab and the Marina station is on the other side of the 12-lane Sheikh Zayed Road from the Marina itself! Furthermore, the metro does not reach the northern neighbour of Dubai, Sharjah, where the majority of workers in Dubai live and most of the traffic congestion is attributed to. While the metro may alleviate some traffic problems between certain parts of the city, it is unlikely that it will become a viable public transport option, particularly in the summer months when temperatures reach well above 50 degrees.

German architects have hit out at the newly-unveiled Burj

Dubai, the world’s tallest building, as an unsustainable contribution to global building practices. Some say the

skyscraper is a monument to the power of money.

The structure is 319 meters taller than the Taipei 101 tower in Taiwan, which was previously the world’s tallest building, and twice the height of the Empire State Building. The tower’s builder, Emaar Properties, has said the Burj heralds a new dawn for Dubai. But the architectural feat has failed to impress some German architects who questioned the reasons that it was built. The building cost more than one billion euros to build at a time when Dubai is in the grip of a major financial meltdown.

“Nobody knows where the planning hubris of the sheikhs will lead,” Christian Baumgart, president of the German Architects’ Association (DAI) said.

The monumental nature of the glass-and-steel structure is widely seen as a symbol of Dubai’s ambitions.

“You have to ask, ‘Why we are building all this?’ To bring quality of life and a smile to people – and I think we should continue to do that.

Architect Meinhard von Gerkan said the skyscraper was “an economically pointless symbol of prestige, representing the power of money.”

Gerkan, who designed Berlin’s central train station, told Germany’s Deutschlandradio that buildings with such high maintenance and construction costs never made a profit. A statement on the German Architects’ Association Web site asked where the excessiveness of such gestures would lead.

“Architecture is about value and is not defined by higher, bigger, further,” Baumgart said.

The architect said that the tower offered a cautionary tale for builders in Europe. Bildunterschrift: The 162-storey Burj Dubai was unveiled in a glitzy ceremony “One thing is sure though: what has become a glass and ferroconcrete desert hardly represents a sustainable contribution to building practices around the world,” Baumgart said.  In Europe, he said, the emphasis was on refurbishing and upgrading existing buildings rather than building bigger ones.