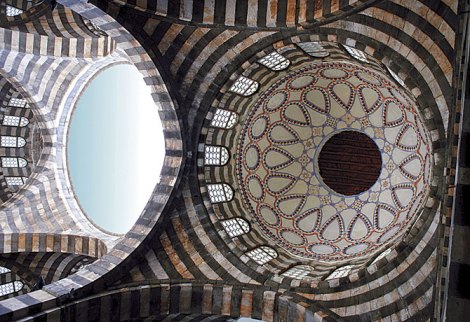 No record event has occurred in the world but Damascus was in existence to receive the news of it. Go back as far as you will into the vague past, there was always a Damascus. To Damascus years are only moments decades are only flitting trifles of time. She measures time not by days, months and years but by the empires she has seen rise and prosper and crumble to ruin. She is a type of immortality. She saw Greece rise and flourish, two thousand years, and die. In her old age she saw Rome built, she saw it overshadow the world with its power; she saw it perish ……she has looked upon the dry bones of a thousand empires and will see the tombs of a thousand more before she dies.

“Damascus, with a history stretching back 7,000 years, is the oldest continuously inhabited city on Earth. A recent book, Syria: Through Writers’ Eyes offers a revealing perspective. Several Englishwomen fell passionately in love with the city: Isabel Burton, Freya Stark and Brigid Keenan. They see Damascus as a sensuous place, where architecture has an almost sexual power. To my mind,” writes Keenan, “Damascus is like a veiled woman who reveals nothing of herself on the outside and keeps all her beauty for those privileged to be close to her…”

Walking through the al-Hamidiyeh souk also offered stupendous architectural theatre. Suddenly, the dark street curved and opened into bright sunlight, with the heroic remains of a classical colonnade and a portico defining one side of a small square and leading to the huge Roman temple of Jupiter. The story of these buildings tells much of the history of Damascus. The Romans built their temple on the site of 9th-century BC temple to the god Haddad. In its turn, this was converted into a Christian basilica dedicated to St John the Baptist and then, after the Muslim conquest of Damascus, transformed into the huge Ummayad mosque.

walls of the temple survived all these transformations. The exterior is breath-taking, the gravitas of Rome merging with the sensuous fragrance of the Orient. The interior is stunning. The Roman wall now surrounds a huge court, its polished paving sparkling white in the sun. Here people come not just to pray, but to relax, to meet, to escape the pressures of worldly life. In one corner I observed a family having a picnic; they smiled a welcome as I walked past.

Significantly, the Christian phase in the building’s history is celebrated rather than ignored – a testament to the tolerance that characterises early Islam. There is a minaret dedicated to Jesus. The main prayer hall of the mosque is dedicated to St John the Baptist. Inside this hall all was tranquil, with red carpets lining the floor, groups of people sitting and talking quietly, and children rolling around “.

Tricky, Damascus. Tricky, because it’s Syria, and Syria, as we know, is a “rogue state” and a political pariah. Tricky, too, because given Syria’s regime, you can’t help but wonder whether you should be visiting at all. And tricky also because Damascus is a city of which we – or certainly I – have barely a notion, so obscured is it by ignorance and Syria’s unwholesome image.

Well, I did visit Damascus, and found it a ravishing city, with an extraordinary history, extraordinary sights and extraordinary people – kind, cultured, tolerant, hospitable, courteous and well-educated.

Damascus, I read, is the oldest continually inhabited city on earth – 5,000 years and counting. It has a street – I would walk down it – mentioned in the Bible. It also has Arabia’s most exotic souk; one of Islam’s greatest mosques; an old quarter barely changed in centuries; and a cast of wonderfully evocative names: Saladin, Hadrian, Lawrence of Arabia, Nebuchadnezzar, Tamerlane, Alexander the Great, St Paul.

Ah, St Paul. Half-remembered RE lessons came back to me – the road to Damascus, scales falling from eyes, Damascene conversion… And damask, from Damascus, because the material was first made here; and damsons, the “Damascus plum”, also from the city; and damask roses, likewise, the common name of the red-pink Rosa damascena.

The old city’s labyrinth is virtually unexcavated, and unimaginable treasures must lie below the streets. Much like the unimagined treasures that lie behind its numerous secret doorways, notably the Khan As’ad Pasha, the finest of what used to 137 khans, or caravanserais, in the city, a beautiful vision of domes, grey-white pillars and sun-dappled arches. Still finer, are the interiors of the hundreds of old Damascene houses, their decorated rooms ravishing, their calm, fountain-splashed courtyards totally unexpected – almost unbelievable – after the cramped enchantment of the souk. Many are crumbling, a few have been saved, part of a cultural renaissance that has taken hold in the city in the last three or four years.

The mosque dates from 708 and the time of Caliph al-Walid, one of the earliest and greatest Muslim rulers, whose Umayyad dynasty forged an Empire that stretched from the French Pyrenees to the borders of China.

This was my first visit to a mosque, and, like virtually everything in Damascus, was a revelation. I had imagined a place of inner sanctums and strange exclusions, but no: despite its importance, we tripped easily into the courtyard, men and women alike, with no barking commands, religious police or disapproving looks. Inside, children ran around and exhausted shoppers sat snoozing or chatting on the polished marble. All was informal, with less sense of sanctity or decorum than a British cathedral. In the vast prayer hall it was the same: a few people prayed, most walked and talked. Hushed reverence? Not here.

I loved Damascus for this and any other number of things and will go back. I will go back for more of the city, but also for Syria’s other unsung treasures: for the ancient town of Aleppo, for Palmyra, a vast Roman town half-hidden in the desert, and, above all for the Crac des Chevaliers, the majestic Crusader fortress Lawrence of Arabia called simply “the finest castle in the world”.

And Lawrence was a man who knew his Middle East. Unlike me. Unlike most of us. But I’m learning, and now know not to judge a country on its regime. So come to Syria. Leave your preconceptions at home. Follow St Paul and prepare for your own Damascene conversion. 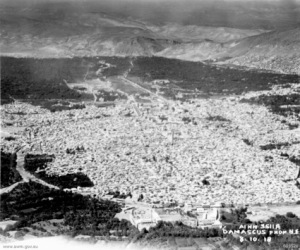 “Conversion for me was not a Damascus Road experience. I slowly moved into an intellectual acceptance of what my intuition had always known.”

One response to “To … Damascus”

Art and Architecture in the Arab world

This website searches for the shape and the tone of the Arabs (whatever is that !) society, focusing on architecture and landmarks that collectively represent the image a society has of itself.